A Slice of Queenie Pie

Here are screen shots from a recent lot on eBay for pages from the script of Duke Ellington's opera Queenie Pie. This was one of the final  projects Ellington was working on at the time of his death. Its composition is intertwined with other projects for musical theatre throughout his life which will be explored in a second post.There is more about a 2009 performance of there work at the University of Texas here.

Duke Ellington's QUEENIE PIE - (A Jazz Operatta in the Key of Make Believe)
By: Wolfe. George C. / Music and Original Story by Duke Ellington
3-hole punched, with ties at ends.
Original printed typescript - unpublished script by George C. Wolfe. Lyrics by Susan Birkenhead. Music Development and Adaptation by Maurice Peress. Production Consultant Mercer Ellington.
The character Queenie Pie is loosely based on Madam C.J. Walker (1867-1919), a Harlem beautician who invented a preparation to straighten hair, and who is cited by the Guinness Book of Records as the first woman to become a millionaire through her own achievements. 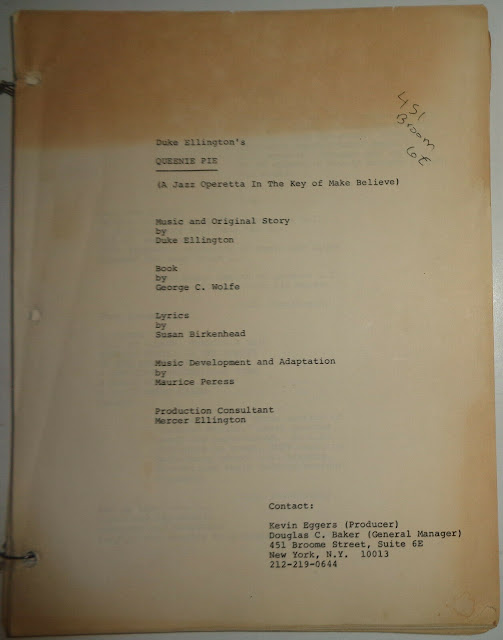 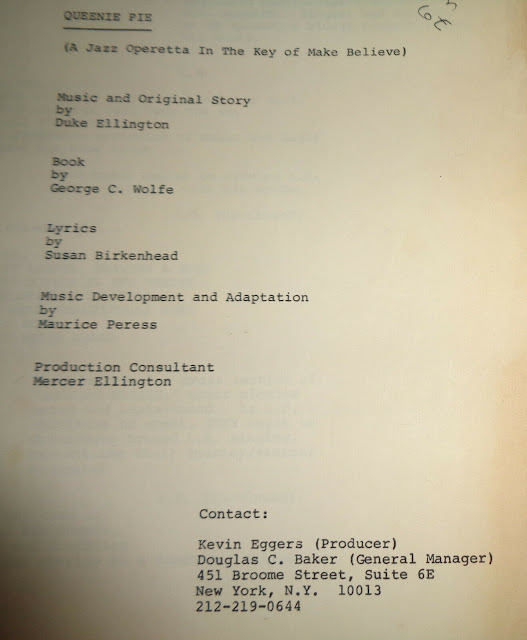 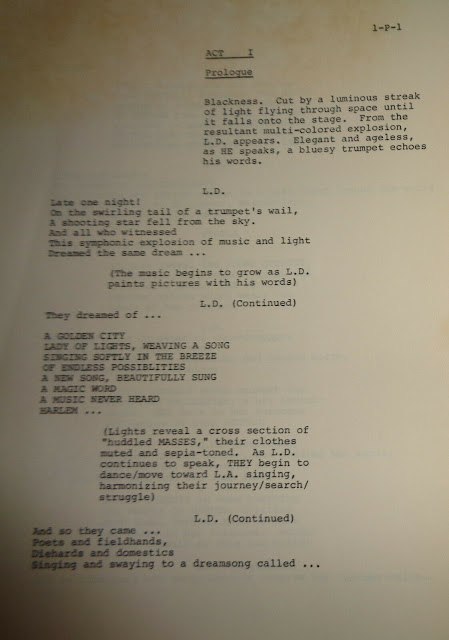 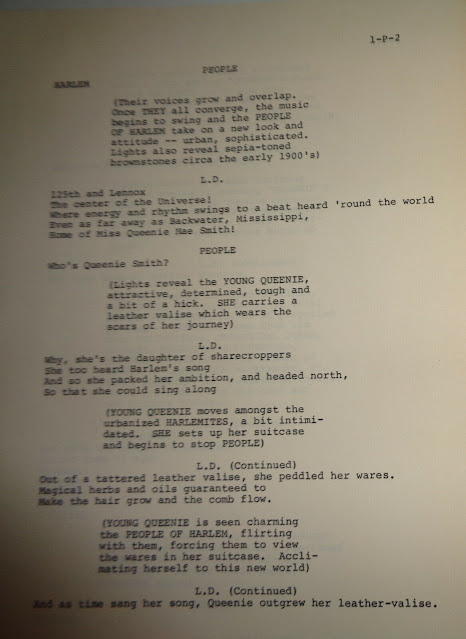 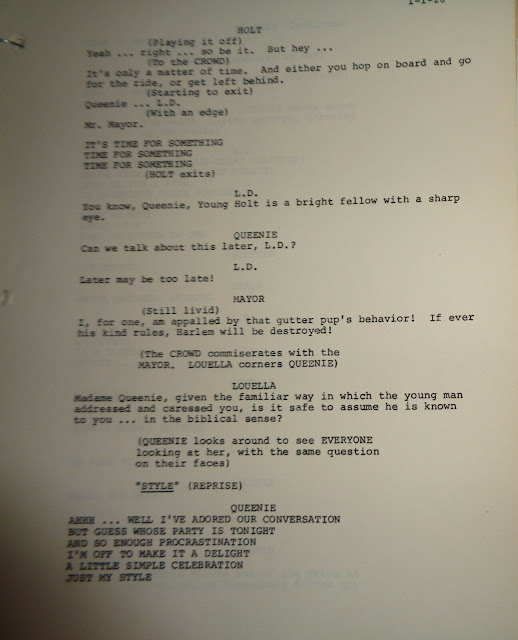 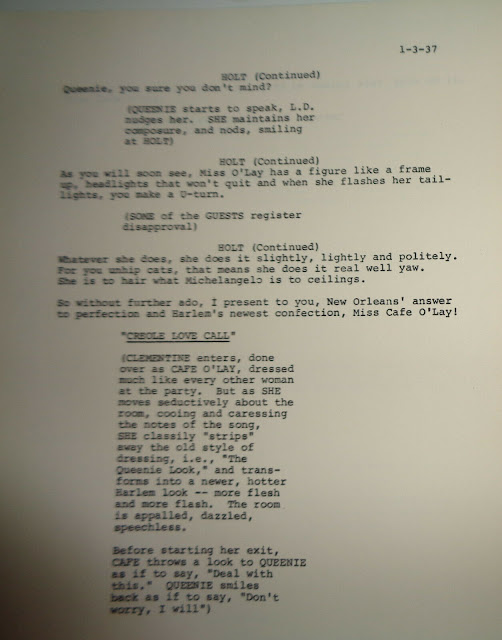 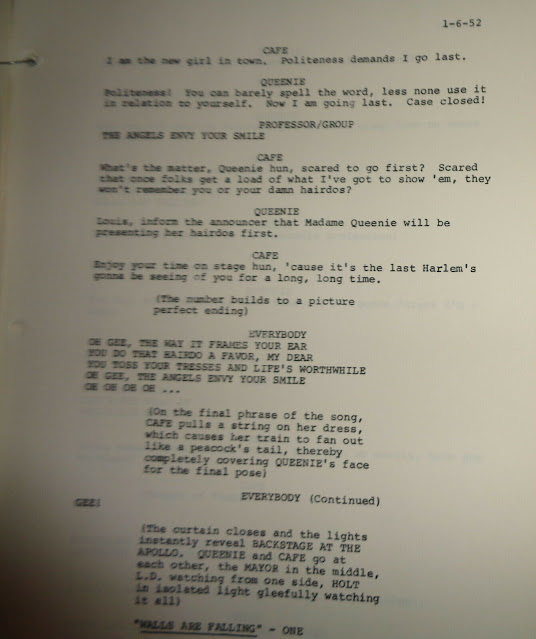 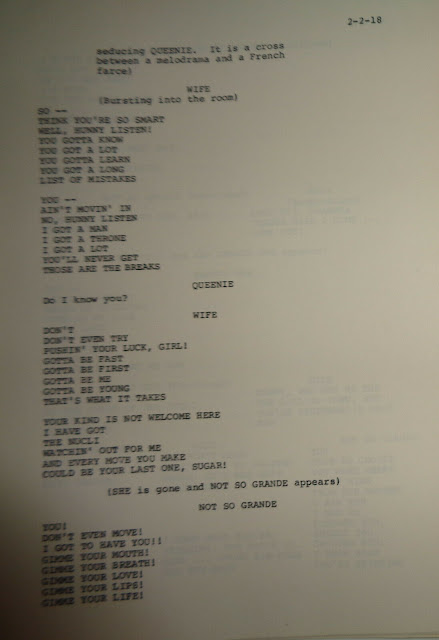 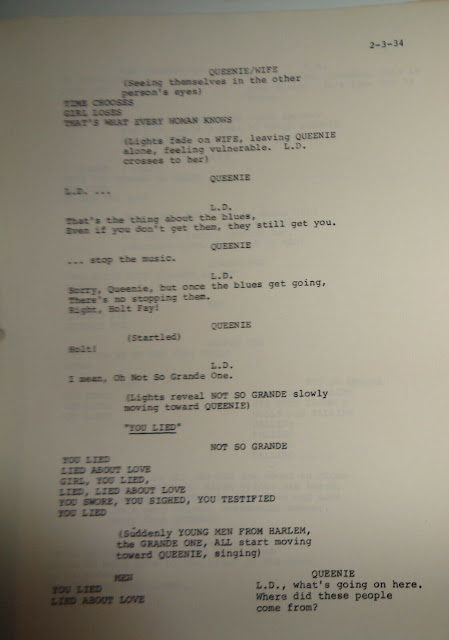 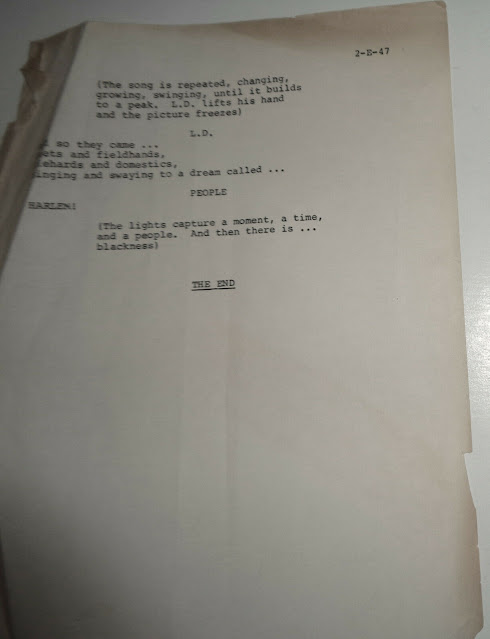 A Spoonful of Sugar Hill 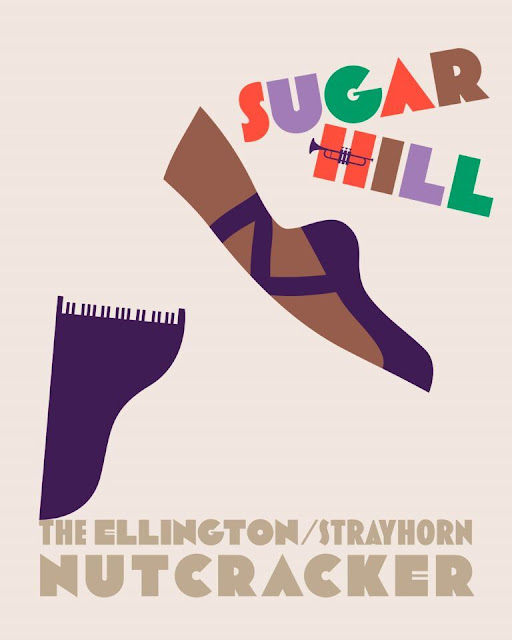 From The Pittsburgh Courier...

BILLY STRAYHORN, THE ICONIC JAZZ COMPOSER. HIS WORK, ALONG WITH DUKE ELLINGTON, WILL FILL THE AIR DURING “SUGAR HILL—THE ELLINGTON/STRAYHORN NUTCRACKER,” AT THE BENEDUM CENTER, OCT. 19-30.

The New Pittsburgh Courier has learned exclusively that the world premiere of Sugar Hill—The Ellington/Strayhorn Nutcracker, will   debut in Pittsburgh, at the Benedum Center, from Oct. 19-30. It’s a jazz-steeped reimagining of The Nutcracker based on the genre-defying collaboration of the legendary Duke Ellington and Pittsburgh’s favorite son, Billy Strayhorn. Sugar Hill is set to the timeless music of Ellington and Strayhorn and features a libretto by Jessica Swan. Sugar Hill will then play in New York City at the New York City Center from Nov. 15-27. The performance is directed by Joshua Bergasse and produced by David Garfinkle. 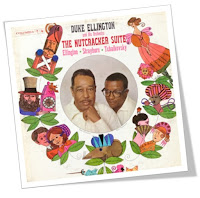 “Premiering it in Pittsburgh is very, very important,” said A. Alyce Claerbaut, a niece of Strayhorn, in an exclusive print media interview with the Courier, July 17. “(Strayhorn) and Duke partnered in 1960 to do this work (jazz album The Nutcracker Suite) and it has remained a holiday favorite. If you look every year, some orchestra’s doing it, so it’s quite an honor to have it fully developed (the performance at the Benedum) in a jazzy way.”

Claerbaut is an executive producer of Sugar Hill, but she’s also president of Billy Strayhorn Songs, Inc., formed a few decades ago to make Strayhorn’s music available to the public and to capture, manage, preserve, and expand the artist’s legacy. 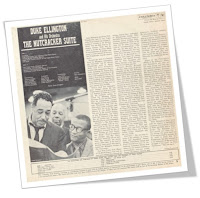 Strayhorn was born in Dayton, Ohio, in 1915, but his family soon moved to Pittsburgh. He attended Westinghouse High School and, according to a biography from the American Ballet Theatre, attended the Pittsburgh Musical Institute for piano lessons and classical music study. In 1938, at just 23 years old, Strayhorn met Ellington and had an impromptu audition for the famed jazz aficionado at Pittsburgh’s Stanley Theatre. Ellington was so impressed by Strayhorn’s abilities that Ellington moved Strayhorn with him to New York City, and Strayhorn began writing musical arrangements for Ellington and his band. This relationship lasted more than 25 years, which included the famous jazz album, The Nutcracker Suite, in 1960, for Columbia Records. 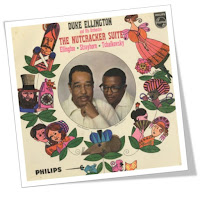 “He was a very gentle man, and he was a man who had such respect for everybody,” Claerbaut told the Courier about her uncle, Strayhorn. “I knew him personally. He was a very kind person. He cared about people…He had a powerful presence in the world. He was with Martin Luther King (Jr.). He helped launch the March on Washington. He worked with Jackie Robinson to raise money for civil rights. He was in Chicago to do Duke Ellington’s My People (stage play) commemoration of the 100 years of progress after the Emancipation Proclamation. He was supportive in Harlem of the Copasetics  (tap dance group). A lot of people don’t know about these activities. He was really an activist and he used his music to do that.” 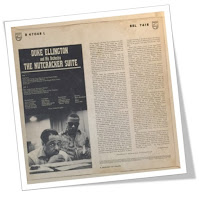 In 2000, the historic Regent Theater in East Liberty was renamed the “Kelly Strayhorn Theater,” in honour of Staryhorn and another Pittsburgh legend, actor. performer gene Kelly.As Claerbaut spoke with the Courier, she began to recall some of her favorite memories with whom she calls, “Uncle Billy.” She recalled the time while in high school, she wrote a poem full of song lyrics. “He lived three blocks from me…he said, ‘Meet me on Amsterdam Ave. (in New York City), so I met him and gave him my poetry, and he looked at it and said, ‘Oh, OK,’” Claerbaut remembered. “And that was the end of that. So, I often tell people, in exploring all of his manuscripts, we didn’t find my song in there," she said, jokingly.

And what about the time in high school that Claerbaut introduced her uncle to the school’s jazz band group? “We went into the auditorium and my music teacher was there,” Claerbaut said. “I said, ‘My uncle is here to hear the jazz band,’ and she said, ‘OK,’ and I said, ‘This is my Uncle Billy Strayhorn…’ and she almost fell off the stage.”

Claerbaut said then, “all the kids who knew jazz were surrounding him like they were his bodyguards. He was just amused, he loved talking to young people. He was so good with them. That is a real fond memory I have of him.”

Claerbaut said she’s noticed how younger people are becoming more and more interested in Strayhorn’s music and his life. A nephew of Strayhorn, Galen Demus, started the Billy Strayhorn Jazz Education Scholarship in 2008, which promotes the art of jazz to students in high school and college.

“So many people are coming to jazz because jazz is now in the schools and they’re being educated in it,” said Claerbaut, who was named a “Chicagoan of the Year” in 2011 for her continuous work in jazz circles in Chicago and beyond.

Claerbaut then pointed to the continued acceptance of those in the LGBTQ community as a reason for the interest in Strayhorn, who was gay.

And pop superstar Lady Gaga, a few years ago, championed Strayhorn by singing Lush Life, one of Strayhorn’s most popular songs, along with Take the ‘A’ Train.

“When that happened (Lady Gaga), there were a bunch of young people who heard of him (Strayhorn) for the first time,” Claerbaut told the Courier.

Strayhorn had “a tremendous sense of humor,” Claerbaut added. “You could ask him any question about music. He was always encouraging us.” 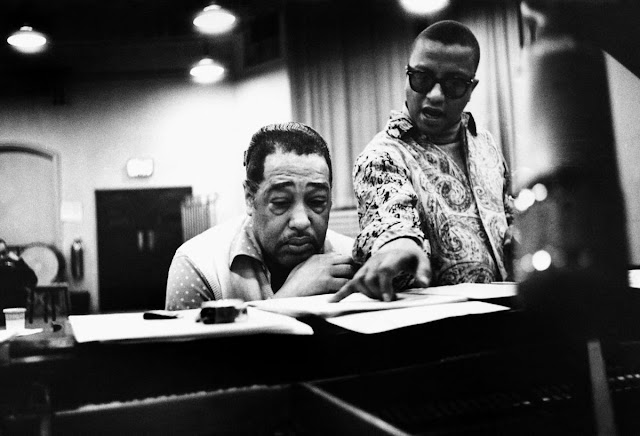 A recent lot in the virtual auction houses...

You are bidding on a 1 page concert contract and correspondence sent out by the Duke Ellington organization. This particular document references the Duke Ellington concert that was scheduled for February 22, 1972 in Corvallis, Oregon.

The contract is the white copy and has original signatures in black ink. The signatures are of the employer and a representative of Duke Ellington.

There has been no attempt to authenticate these signatures and are not guaranteed to be authentic.

I am NOT an autograph collector or expert and encourage buyers to research these signatures on their own.

Most artist give their managers/agents power of attorney to sign contracts and generally are not involved in the union/paperwork operations. As such, I am pricing these contracts accordingly and assuming they are not signed by the actual artist. 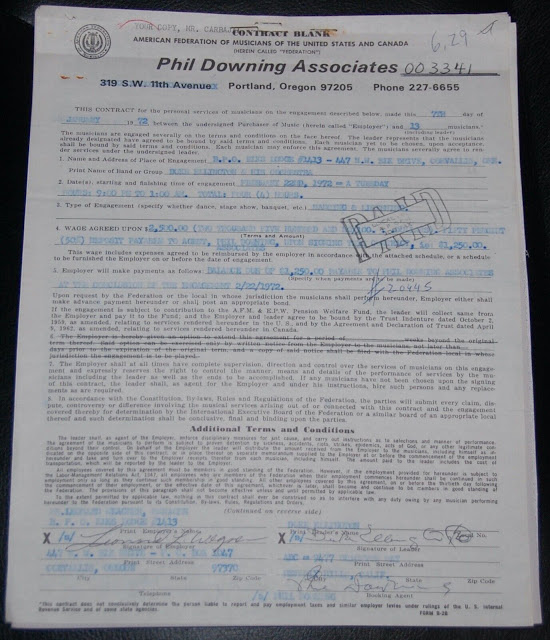 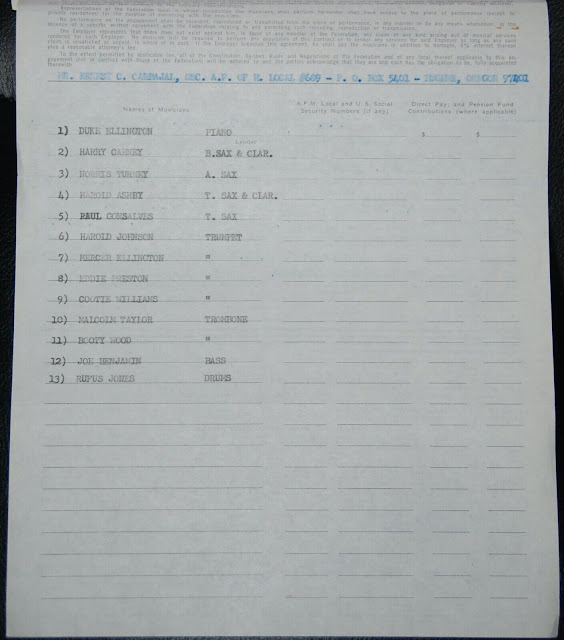 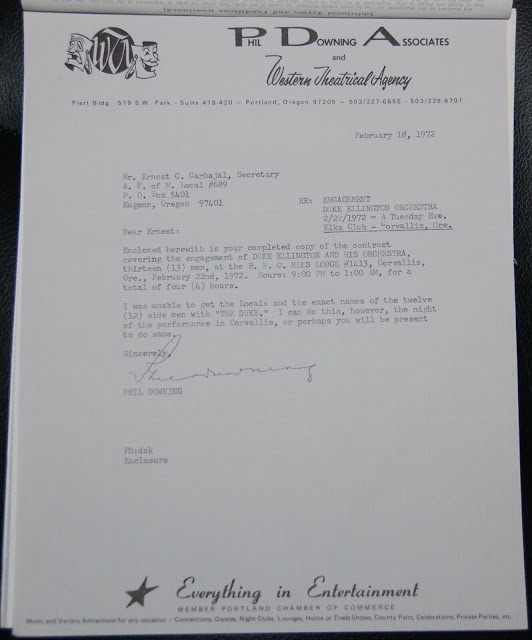 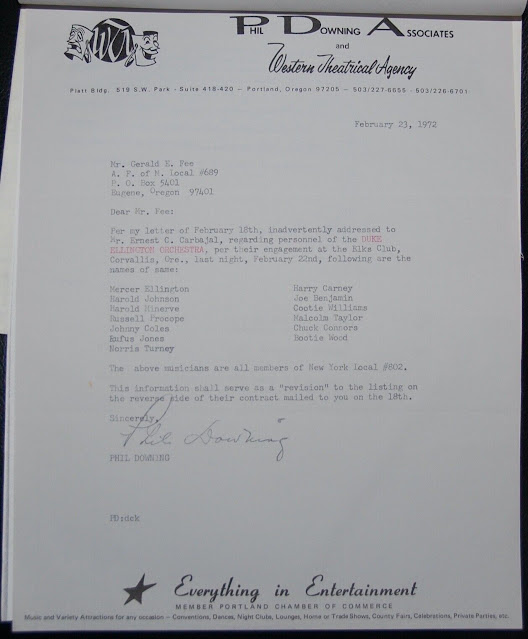 The latest edition of Tone Parallel has just been published to subscribers on the fiftieth anniversaryof the Night of Suites at The Duke Ellington Festival, University of Wisconsin. 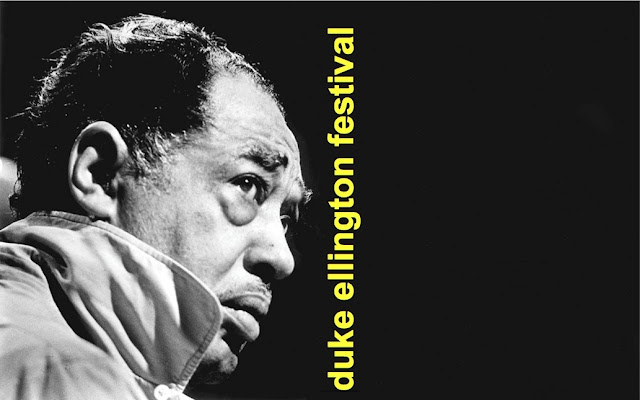 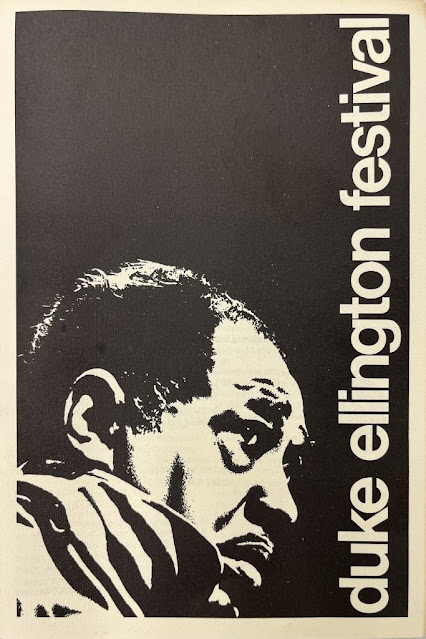 Today is  the fiftieth anniversary of the first day of The Duke Ellington Festival and Duke Ellington Week at The University of Wisconsin which ran from 17-21 July, 1972. To celebrate, here is a playlist of the suite written for the Festival in the order in which it was presented in concert on the final evening of the week, beginning with Ellington's sublime piano solo, The Anticipation...

For this Ellington fan in the UK, Duke's appearance at Coventry Cathedral in February, 1966 (for transmission on ITV that year on Easter Sunday) is a touchstone of his career.

I was sorry, then, to miss this celebration in Coventry Cathedral at the end of April this year. Here is a copy of the announcement for the historical record...