When Clark left The Duke 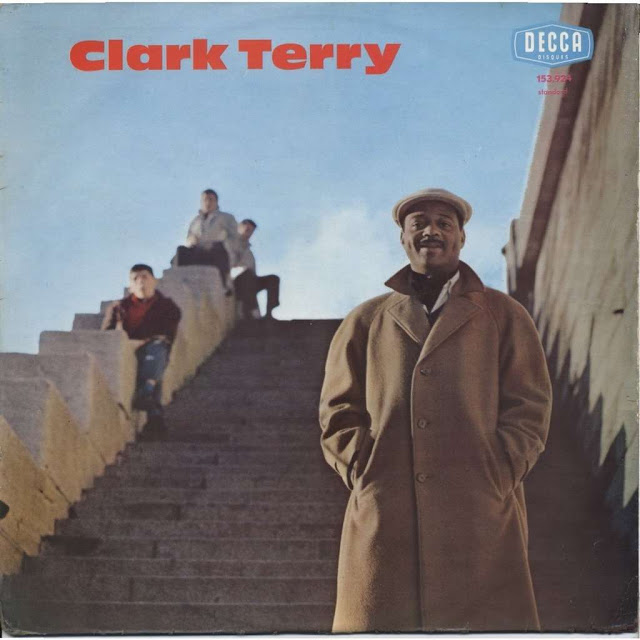 14 December this year sees the centenary of Clark Terry. As the days grow short and the nights draw in, I'm taking my albums by Clark Terry down from the shelf and giving them a re-listen, digging about on line to research his work.

Given my obsession with Ellington's music, needless to say, most of the albums I have in Clark's name were recorded during his tenure with the Orchestra, 1951-59, including several with bigs co-centenarian Paul Gonsalves.

It seems counter-intuitive to begin with Clark's work after he left Duke, but I recently encountered the following video on YouTube of a gig with  Bud Powell which took place immediately after he had left the band. The Ellington Orchestra had been on a tour of Europe in the autumn of 1959 and this was Clark's last engagement as a full time member of the band. He bailed out after the tour to take up an engagement with Quincy Jones and his Birth of a Band outfit. It was at this time, on 7 November, 1959, Clark played a club in St Germain, Paris, with Bud Powell on piano, Barney Wilen on tenor saxophone, Pierre Michelot on bass and Kenny Clarke on drums.

This particular engagement and the only other sides recorded by Clark with Powell are available on a long-out-of-print CD as part of the Mythic Sound series entitled Earl Bud Powell - Cookin' At St Germain, 57-59.

Here, however, is both sound and vision of that club date...

I happened upon the video because extracts of the date appear in a documentary about Bud Powell I had recently watched and burned to DVD entitled L'exile intérieur. While in paris, of course, Bud recorded an album for Reprise produced by Duke Ellington who introduced himself at the first session for the Money Jungle album by saying he was "the poor man's Bud Powell'. There is a blink-and-you'll-miss-it appearance in the documentary presented here...
Posted by Ian at 06:58:00